A pair of shaped oval George III silver Meat Dishes with gadroon borders, London 1773, by Thomas Heming. In addition a a pair of silver beef machine brackets by Thomas Heming, 1770.
The dishes are engraved with a crest below a baron’s coronet for Peter King [1736-1793], 6th Baron King. Peter King married Charlotte, daughter of Edward Tredcroft of Horsham in 1774.
These dishes formed part of an extensive dinner service purchased, presumably after his marriage, by Lord King from Heming in 1773.

18th century archives contain a number of references to silver ‘Beef Machines.’ It seems certain that the term refers to upright brackets designed to sit in, or clamp onto, meat dishes, with forked finials and sometimes additional slots for skewers. One, apparently complete, example is in the collection of the Colonial Williamsburg Museum and comprises a meat dish and screw-on brackets by Aldridge and Green, London 1784, together with an unmarked 20 inch skewer. 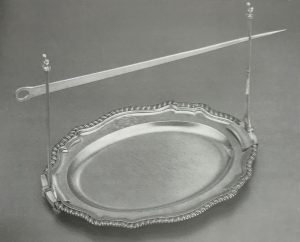 Clayton, in his ‘Dictionary of English and American Silver‘, notes three pairs of such brackets, of varying heights: two of which pairs are marked by Thomas Heming. One such pair appeared for sale in Christie’s London [18th May 1988, lot 345] and was marked by Heming for 1773, the brackets being 31 cm. high, with two additional slots, and weighing 15 ozs.

The ‘Wakelin Ledgers’ for 1770 provide the following references to these brackets and their skewers:

These dishes and the ‘Beef Machine’ brackets are offered with a George III shell ended skewer which is just long enough to span across the brackets on the dish. A chain and pin would be required to secure the skewer in position.

The dishes are in good condition with a surface consonant with their use as serving dishes. The surface has not been spoilt by attempts to over-polish them.

The upright brackets are in good condition but lack the original retaining pin and chain at one end.

The skewer is in generally good condition.

The skewer which is included has not been measured.