May Drummond.
A small unmarked silver Box, circa 1735, engraved on the underside with the name May Drummond.
The purpose of such small boxes remains uncertain but it seems likely that they were used as little boxes for a sponge with perfume and were a British equivalent of the Dutch Loddereindoosje. For an illustration of two such boxes by Robert Collier, see my article attached to the ‘Research’ tab of this website: ‘Family Business: Robert Collier, the master of James Phipps.’
It seems certain that this box belonged to May Drummond, 1710-1777, the youngest daughter of John Drummond, a ‘factor’ in Edinburgh, who joined the Quakers and was a very active preacher throughout England and Scotland for many years. In 1736 she published ‘Internal revelation the source of saving knowledge: candidly recommended in several epistles.’ As a preacher but also as a good-looking unmarried young woman she attracted considerable attention and controversy. Thomas Chalkley, in his Journal [‘A Journal of the Life, Labours, Travels &c. of Thomas Chalkley‘, printed in 1766], recorded in 1735: ‘While I was in and about London, I was at eighteen Meetings in that great City, at two of which I was with May Drummond, a virtuous young Woman, who hath a good Gift in the Ministry, and had a gracious Opportunity of declaring her Convincement to our noble Queen Carolina (our great King George’s royal Consort,) The kind Treatment, and good Reception, she had with the Queen, spread so in City and Country, that many Thousands flocked to hear her, and many more of the Gentry and Nobility, than was ever known before, to our Meetings.’ However, the threat that May posed to the centralist organisation of the Quaker movement, brought about her expulsion from the Quakers in 1766. She died in 1777.
George Drummond, May’s brother, was twice Provost of Edinburgh and a significant person in the modernisation of the city and the building of the New Town. 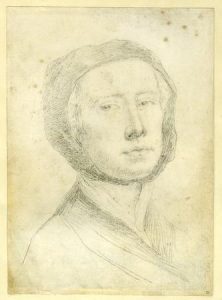