An Edwardian silver presentation Box for ‘Throne’ the ‘Royal Soap’.

A silver presentation Box lined with green velvet, Sheffield 1904, by Walker and Hall. The lid of the box is embossed with a panel of flowers against a matted background and ‘THRONE The Royal Soap‘ above ‘Violet Bouquet Edward Cook & Co. Ltd. The Soap Specialists London.’ The plain front of the box is engraved ‘Presented to Lady Smyth by Edward Cook & Co. Ltd., the Soap Specialists, London, E. as s Souvenir of the Bazaar & Fete, June 1905, in Aid of the New Church Room, Pill. Soap Box Wrappers etc. are English work throughout.’
The whole stands upon scrollwork legs. ‘Floris’ soap bars have been added to replace the missing original soap bars.

Pill is in north Somerset.

Edward Cook began his soap making company in Norfolk in the early 19th century but the company later moved to London. The business was incorporated as ‘Edward Cook and Company‘ in 1898. It became part of a conglomerate ‘Soap Trust’ in 1906. Their company history was published in 1915: ‘Soap: its History and Connection with the House of Cooks‘, London. Amongst their range of perfumed soaps, ‘Throne’ soap was one of the most popular and Cook’s evidently sought the recommendation of society ladies, which they published in their advertisements: ‘The Duchess of Leeds Would be Glad if Messrs. Edward Cook & Co. Ltd. would send her another box of ‘Throne’ soap‘; ‘The Duchess of Newcastle likes the ‘Throne’ soap and would like 6 dozen pieces sent to her house at Worksop, and 6 dozen to her at Forest Farm, Windsor Forest‘; ‘The Marchioness of Exeter Thinks the soap is very good, especially the ‘Thrine’ soap, which lathers well, even in hard water.‘ Silver presentation boxes, containing ‘Throne’ soap, were part of the company’s promotional programme. A silver box, of plainer form than this example, presented to the Princess of Wales in 1900, survives with its original soap bars in extraordinary condition [illustrated below by kind permission of www.silverperfect.com]. Another version, identical to this box and also now lacking its original soap, was presented to ‘Her Grace The Duchess of Sutherland By Edward Cook & Co Ltd, The Soap Specialists, London E. As A Souvenir Of The Sale of Work, November 1904. At The Royal Normal College In Aid Of “The Lad’s Rest” Beulah Hill. Soap Box Wrappers etc are English work throughout.’ [sold Bonhams auctioneers, Scotland, the Dunrobin attic sale, 20th April 2021, Edinburgh]. 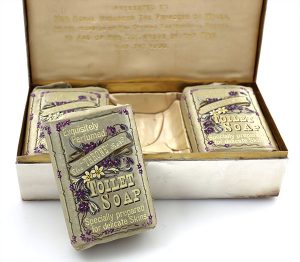 Send Enquiry for An Edwardian silver presentation Box for ‘Throne’ the ‘Royal Soap’.

Good. Wear to the velvet on the underside of the box. The original ‘Throne’ soap bars missing.