A William IV silver Snuffbox in its original Morocco outer case, Birmingham 1832, by Nathaniel Mills. The lid is engraved with a presentation inscription: ‘Presented to Thomas Griffiths Esqr. by several of his Brother Reformers, as a tribute of their respect for his valuable exertions in promoting the cause of Parliamentary Reform. Cheltenham 1832.’
Within the box is a manuscript note: ‘To E. Lloyd Griffiths Esq. To One who so worthily follows in the footsteps of his honoured Father, both in promoting the best interests of the family, and in sustaining an unsullied Character, for high integrity and moral excellence, this memorial box, is with much love presented by Emily and George.’

Thomas Griffiths, circa 1789-1836, was a solicitor in Cheltenham, who was appointed Returning Officer for the Borough of Cheltenham in August 1832. The Reform act of June 1832 had, for the first time, given Parliamentary representation to Cheltenham. The borough was amongst a number of towns provided for in schedule ‘D’ of the act and there had been an active campaign within the town to gain Parliamentary representation. The Cheltenham ‘Patriotic Association’ was founded in May 1831 for that purpose and was strongly supported by Colonel William Berkeley, created Lord Segrave of Berkeley Castle in 1831. This Whig association was opposed by the Tory ‘True Blue’ Club.

The election was held on the 10th December 1832 at Barnett’s Riding School, at which Griffiths presided alongside Mr. Russell, the chief of police. Craven Berkeley, the younger brother of Lord Segrave, who had been selected as the Whig candidate, met first with his supporters at Sheldon’s York Hotel, before they marched with banners and music to the riding school. On their arrival, Griffiths, as the returning officer, addressed the townsmen, asked for good order, read the Bribery Act and requested the nomination of any candidates. Thomas Gray nominated Craven Berkeley. In the event no Tory candidate came forward to oppose Craven Berkeley so he was duly returned.

Thomas Griffiths died in July 1836 and was buried at St. Mary’s Cheltenham. His memorial is inscribed: 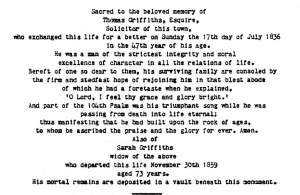 The snuffbox was evidently presented to his son, Edward Lloyd Griffiths, also a solicitor in Cheltenham, by two of his other children, George [the Reverend George Pruen Griffiths] and Emily Sarah. Thomas Griffiths had been in partnership as a solicitor in the town with Edward Pruen. The records of Griffiths and Pruen are held at the Gloucestershire Record Office: reference D1106.

A memorial to Thomas Griffiths’ widow and children is at Holy Trinity Cheltenham: ‘Sacred to the memory of SARAH GRIFFITHS widow of the late  THOMAS GRIFFITHS, Esq.  Solicitor of this Town  she departed this life  November 30th 1859  aged 73 years. Also of SEPTIMUS CONANT PRUEN  Esquire son-in-law of the above who died 2nd Jan. 1865  aged 47 years to die in Cain. Also of  EMILY SARAH eldest daughter of the above  THOMAS & CATHERINE GRIFFITHS who died June 29th 1867  aged 51 years. Also of LOUISA PRUEN  who died Dec. 15th 1899  aged 80 years.‘

A thesis on the political reform movement in Cheltenham is to be found online – Courtenay, Adrian Hugh (1991). Parliamentary representation and general elections in Cheltenham Spa between 1832 and 1848: A Study of a Pocket Borough. MPhil thesis The Open University.