A rare pair of George II silver Candlesticks, London 1734, by John Jacob. The bases are stepped with a deep reverse ogee between two convex mouldings, the lower deeper and the upper narrower. The upper flat surfaces of the bases are flat-chased with four female masks within scrolls and stippled panels. The baluster stems are capped at the shoulders with stylised leaves. Each stick is engraved within the well of the base with a reverse script cipher ‘R’ below a baron’s coronet. The sticks have a pair of later nozzles, Robert Garrard, London, with no date letter but the duty mark of 21st June 1837 to 28th May 1838.

The life and career of this interesting Huguenot silversmith are being researched at present by a descendant of the family. Hopefully, the research will be published before long. Portraits of John [Jean] Jacob and his second wife survive and are now part of the collection held by the Huguenot museum, Rochester, Kent. Relatively few pieces struck with Jacob’s mark survive. As part of the reasearch work on this pair of candlesticks, a list of known pieces has been constructed comprising 135 various articles and this list is now added to the Research pages of this website. It seems likely that Jacob began as a working silversmith and later became a retailer.

This particular form of candlestick is most unusual and seems to have been particular to Jean Jacob and Charles Kandler [see below for the Kandler example, which has overall flat-chasing and a simple spool-shaped capitol]. Two other Jacob marked pairs are known and each is marked for 1734. One pair has a domed centre between the base and the stem whereas this pair and the other pair have a sunken well which rises conically into the stem. A later stick of this shape by Café appeared for sale together with an unmarked example and one of the 1734 pairs. The chased female masks on the upper side of the bases on these candlesticks have not been noted on any other pair.

See above another pair of 1734 [recorded in the list added to the Research pages of this website]. 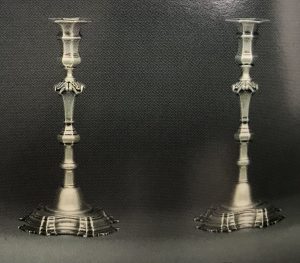 See above the pair of 1734 with domed section between base and stem.

See below an image of a pair of candleticks, one marked for 1734 by Charles Kandler and the other unmarked. The image is courtesy Wax Antiques, London.

The form of these sticks was adapted by Peter Archambo from 1736. The Archambo sticks are ornamented with masks and rococo cartouches on the corners and on the knops. 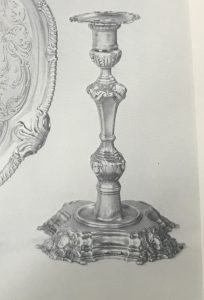 Above: Peter Archambo candlestick of 1736.

The quality of article bearing Jacob’s mark seems to vary from the very finest [see a pair of candlesticks in the Ashmolean Museum] to the mundane [see a cup and cover in the collection at Dunham Massey].

Further research work remains to be done to attempt to establish a provenance for these sticks. They were produced without nozzles [nozzles began to be made from the later 1730’s] but the later associated nozzles, albeit with worn maker’s mark, can be identified as having been supplied by Robert Garrard in 1738. The Garrard papers may reveal the identity of the client for whom they were supplied.

Good overall and of nice weight and colour. One stick has stress cracking on the upper side of the well and an old repair visible on the underside of the base. The nozzles are later additions. One stick is slightly shorter in height than the other but not noticeably on the table.