An unmarked late 17th century silver mounted Box formed from a chestnut, the narrow hinged lid fastened by means of a rotating catch. The exterior of the mount with stylised foliate engraving and contemporary initials.

The purpose of this box remains unclear but two other boxes [the mounts only] have been noted. The first, with the maker’s mark only, struck on the interior of the lid, of Robert Colegate of Lewes, circa 1679, and with contemporary name and date [see below]. 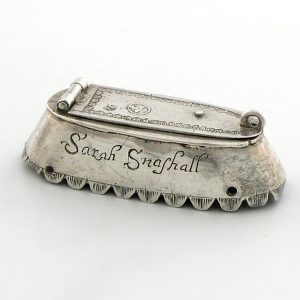 The second, which has the maker’s mark only, ‘HE’ three pellets below, identified by Dr. David Mitchell as probably the mark of Henry Elkins of London, working circa 1673 to circa 1695, has been converted into a toy ‘basket’ and forms part of the interior of a privately owned Doll’s House of circa 1725, [which has descended through the female line of one family]’. [See the composite image below]. 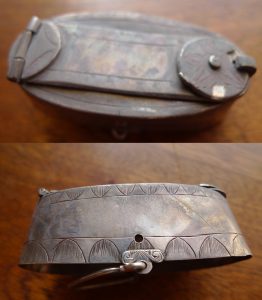 The present example, therefore, despite the condition of the chestnut, is a rare survival.

The silver is in good condition. The nut has shrunk considerably, leaving surface lines on the exterior, which are indented. The top edges of the nut on the interior are curled inwards.